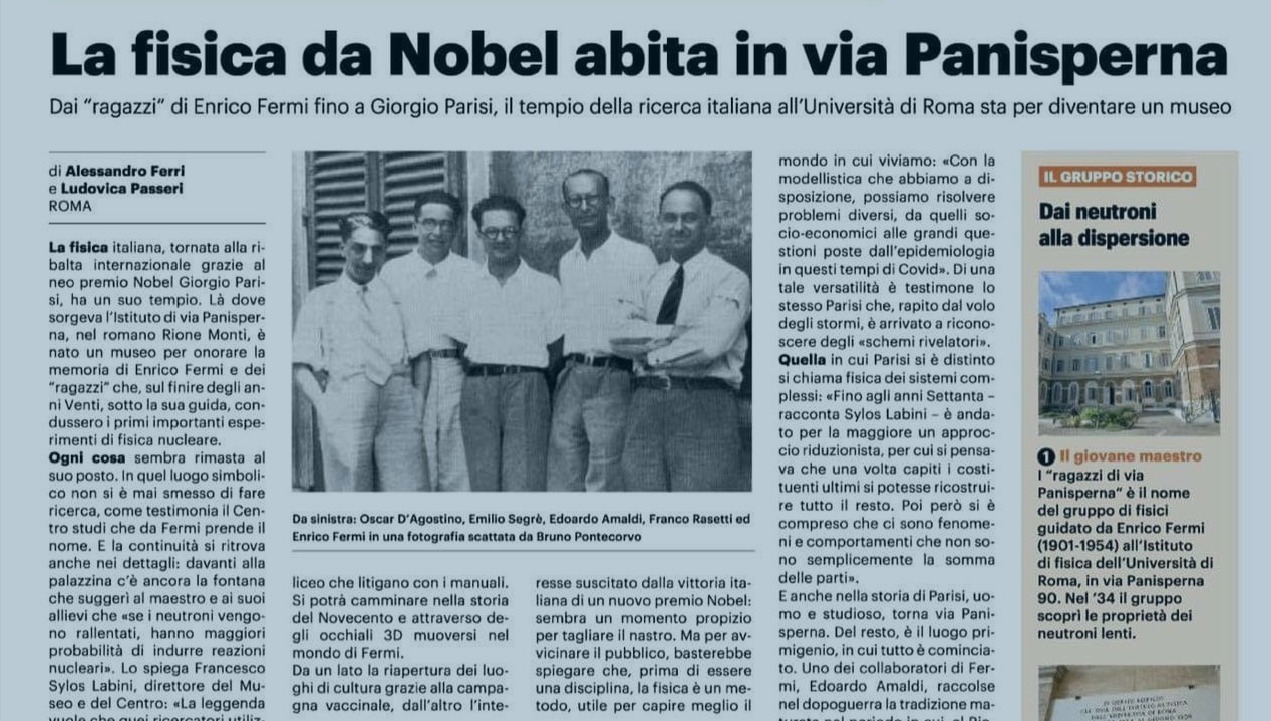 A few days ago on Il Quotidiano Nazionale in the section Il Caffè an article was published about CREF with references to the last Italian pride of this year, the Nobel Prize for Physics awarded to Giorgio Parisi.The authors of the article, Alessandro Ferri and Ludovica Passeri, write about Via Panisperna as a temple for Italian physics. It is there, in fact, that the famous scientists of Enrico Fermi’s group worked, until they were forced to separate and move abroad.

In Italy, Edoardo Amaldi remained, who collected all the research work carried out by the “Ragazzi di Via Panisperna”; L’Abate, as he was nicknamed, was the professor of Giorgio Parisi, who, as Francesco Sylos Labini, director of the CREF Museum, said, is a witness of the approach to physics carried out by the Enrico Fermi Study and Research Center.

The physics of Parisi and of the CREF is oriented towards the study of complex systems, a research perspective that also benefited the Nobel Prize winner: “enraptured by the flight of flocks, he came to recognize detector patterns”.
Coinciding with this great moment for the Italian Physics, pandemic permitting, there will be the opening of the CREF Museum, a place able to revive the Italian scientific greatness of that period reconnecting to the history of Physics in general.

The CREF Museum will offer a different experience from visits to traditional museum compartments. As Sylos Labini affirms: “We often aim to fascinate the interlocutor with big words, but we want to leave something beyond words and enchantment”.

In the “new” Museum, a path full of interactive installations will open up, to be discovered with 3D glasses.
The hope is that the ribbon-cutting ceremony for the opening will take place as soon as possible. Such a museum has an immense value, to celebrate the past greatness of Italian physics in order to ensure that it can return in the future.