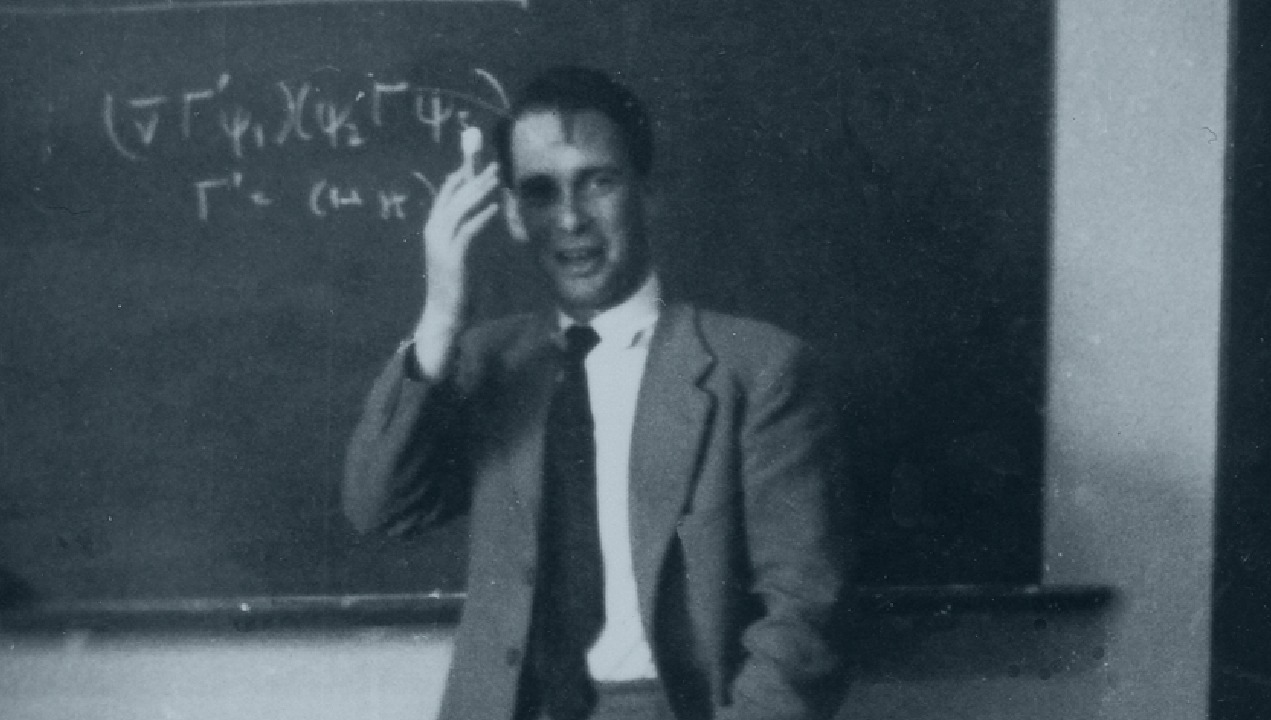 Bruno Touschek, probably one of the most brilliant minds our country has ever hosted

A story written by Storie Scientifiche for the Enrico Fermi Research Center.

“It is difficult to represent, without having known him, Bruno Touschek. As opposed to the stereotype of the physics professor, absorbed in his thoughts and a bit listless, you have to imagine a restless type, inclined to say eccentric and extravagant jokes, to make hybrid puns (Austraco+Italian+English) and to thunderbolt with lively eyes at the interlocutor.”

This is how Carlo Bernardini described Bruno Touschek, one of the most brilliant minds our country has had the honor to host. Touschek played a major role in the development of particle accelerators in Italy, overseeing the construction of the Accumulation Ring (AdA).

Born in Vienna in 1921, he was Jewish on his mother’s side, a circumstance that deeply marked the course of his life. He had no particular problems until March 1938, when there was the Anschluss (the annexation of Austria to Nazi Germany) and he was expelled from school when he was about to attend the last year of high school. He took his high school diploma as a private student and immediately after he spent a short period in Italy, visiting his beloved aunt Ada. Here he began to take some engineering classes, but his desire was to move to Manchester to study chemistry. The outbreak of war cancelled this possibility and Touschek returned to Vienna where he began taking some courses in mathematics and physics. After the racial laws were enacted he was expelled, in 1940, from the university. Thanks to the help of physicist Paul Urban, and the approval of Arnold Sommerfeld, he was able to move to the University of Hamburg.

In 1943 he read an article (which had an enormous influence on him) by the Norwegian physicist Rolf Widerøe, a pioneer in the study of particle accelerator machines. In that work, Widerøe proposed the construction of the first European 15 MeV betatron in Hamburg. Touschek wrote him a letter, correcting some errors in relativistic calculations, and a collaboration began between the two that culminated with the start-up of the machine in the autumn of 1944.

Not long after, in the early months of 1945, Touschek was arrested by the Gestapo and imprisoned. During a transfer to the concentration camp in Kiel, during one of the many death marches, he fell to the ground while marching with his heavy load of books, in the grip of a very high fever. An SS approaching him, exploded a shot that wounded him behind the ear; believed dead, he was abandoned in the street. Rescued and taken to the hospital, he was again arrested and locked up until the end of the war.

In 1946 he returned to his beloved physics and moved to Göttingen, where he obtained the title of “diplom-physiker” with a thesis on the theory of betatron and began to work under the guidance of Werner Heisenberg. The following year he moved to Glasgow, starting to work on the construction of the synchrotron. At the same time he continued his strong interest in theoretical physics, earning his doctorate in 1947. In September 1952, during one of his many trips to Italy, he met several times with Bruno Ferretti, who at that time was professor of theoretical physics at the Istituto Romano. The very similar scientific visions gave birth in Touschek the desire to move to Rome. Edoardo Amaldi, “the undisputed patriarch” of post-war Italian physics, immediately mobilized to get Bruno a research position within the newly formed National Institute of Nuclear Physics (INFN).

“To many, serious and traditionalists, Touschek’s hasty and direct ways (never circumventing obstacles, rather destroying them like a steamroller) appeared excessive- Bruno was intransigent with distinguished colleagues because they had to prove themselves equal to the role they held, he was instead helpful and indulgent with students. […] His presence was continuous and untiring and his exceptional peculiarity was that of being generous with ideas, which he impartially distributed to anyone who wanted to discuss them with him, especially if they were younger. This is certainly not a common quality among physicists.”

The interest in accelerating machines, a dream already cultivated by Enrico Fermi, was growing and in 1952 the deans of Italian physics, Amaldi and Gilberto Bernardini, were able to finance a project for a large electron accelerating machine of the synchrotron type, which went hand in hand with the construction of what would become the National Laboratories of Frascati. Thanks to his brilliant personality, Touschek became a point of reference for anyone who wanted to deal with particle physics, forming an entire generation of physicists: his first graduates were Nicola Cabibbo and Francesco Calogero who both played leading roles on the international stage.

When in 1959 the electrosynchrotron came into operation Bruno was already dissatisfied with the physics that could be done with that type of machine which was, however, among the most powerful of its kind in the world.

As he himself wrote:

“All over the world new and larger machines were being designed and built, and it was felt that if Frascati wanted to keep up, something newer and larger had to be built.”

In fact, at that time, the protosynchrotron at CERN was going to work and many physicists were excited to use that kind of machine because thanks to protons it would be easier to study the properties of strong interactions. Touschek instead was worried that physics with protons did not give sufficiently clear results and, not infrequently, he called it “hadronic hoax”.

In order to develop new ideas and try to be at the forefront, he created a theoretical group in Frascati.

“I was invited – writes Bruno – to a meeting in which this idea was discussed and it seemed that I had been chosen to lead this group. I didn’t like the idea. It smacked of what in Germany was called “the home theorist”, a domesticated animal who sells himself and the little brain he has left to an experimental institution to which he must be useful. I was afraid, and this was an entirely personal and perhaps unjustified fear, that I would end up having the task of proving from an experimental point of view that at Frascati the efforts and the money were well spent. However, I was attracted to the possibility of learning how a large company like Frascati worked and I was particularly fascinated by the idea of having some contact with the technological aspects of the services and techniques necessary for the work of this large machine. At the time I was feeling rather burned out from an overdose of work I had tried to do in the more abstract field of theoretical research. So I wanted to pull myself out of the clouds and get back down to earth, back to what I felt I really understood: elementary physics.”

In the fall of 1959 Wolfgang Panofsky held a seminar in Rome where he discussed the concerete possibilities of colliding two electron beams in the straight section of a machine consisting of two tangent rings. Among the listeners there was Touschek who replied that a much more interesting physics could have come out realizing collisions between electrons and positrons. In his head the seed of matter-antimatter accelerators was already laid. The main problem, that made many people turn up their noses, was the possibility to spin two beams of particles of opposite charge in a single ring to make them collide and Bruno tried to convince the skeptics, as recalled by Carlo Rubbia, “making his voice echo in the corridors, while shouting that positron and electron should meet thanks to CPT theorem” (charge, parity and time symmetry).

On March 7, in Frascati, Touschek was the protagonist of a historic seminar where he illustrated the potential of electron-positron annihilation processes and brought to completion, within a short time, the AdA project, the first prototype in the world of that type of machine that gave way to a new vision of elementary particle physics.

“We physicists are as grateful to him as to few others, because the profound change in the instrumental means by which particle physics is done today is thanks to him, and it is precisely because so many of us have taken advantage of it that physics has made such great strides.”